Discrete wavelet transform can be used for easy and fast denoising of a noisy signal. If we take only a limited number of highest coefficients of the discrete wavelet transform spectrum, and we perform an inverse transform (with the same wavelet basis) we can obtain more or less denoised signal. There are several ways how to choose the coefficients that will be keeped. Here, only two most simple methods were tried - hard and soft tresholding. In the Fig. 1 one can see a simple signal (sine with a lineary increasing frequency) that was used for most of the demonstrations. In the next examples, a noise was added to this signal and the denoising procedure ws used. For this denoising, approximately 4 % of the wavelet coefficients were used for the reconstruction of the original signal. 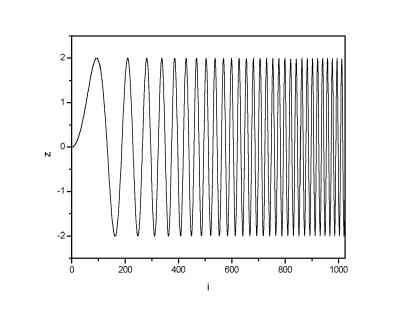 The uniform noise was added to the 1024 points long signal.

The uniform noise was added to the 65536 points long signal.

Gaussian noise with sigma=0.2 was added to the 1024 points long signal.

Gaussian noise with sigma=0.5 was added to the 1024 points long signal.

Gaussian noise with sigma=1 was added to the 1024 points long signal.

As it is known from the theory of discrete wavelet transform, the choice of the proper wavelet scaling function is allways the most important thing. Generally, for the denoising the wavelet scaling function should have properties similar to the original signal (continuity, continuity in derivatives etc.). Here, the effects of using two different wavelets were compared. We used the Daubechies 8 and Daubechies 20 wavelet. Note that for both the wavelets the denoising procedure resulted in quite satisfying result. If we use for example Haar wavelet (box scaling function) for our signal constructed from sine functions, the result would be very poor. As a signal we used a sine function which was in some parts of the signal multiplied by a constant. 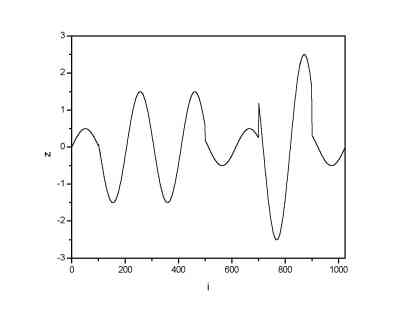 We than added a gaussian noise to this function by a similar way as in previous examples. Example 6

Here denoised signals are plotted for two basis wavelets. The original signal is plotted as well (red line). We can see that in both cases signal was reconstructed in a satisfactory way. The comparison between the difference between the signals and the original one is given below. 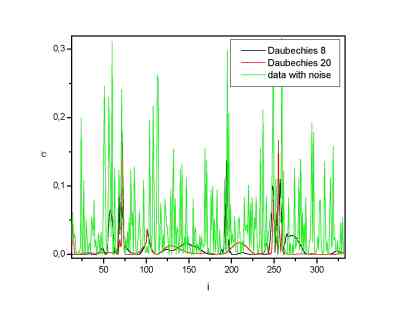